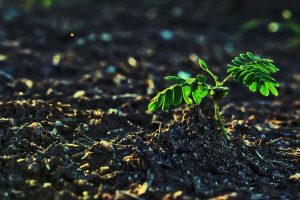 Meet Thokozani Eliam. He is a 38year old farmer who lives in Mphandauyo Village, Ukwe Extension Planning Area located west of Lilongwe district. He is married with 3 children aged 13, 10 and 6. Apart from being a farmer, Thokozani is also a community animal health worker.

Thokozani has been practicing FMNR since the year 2015. Before venturing into FMNR, he was harvesting fewer yields from his 3.5acres of land, a problem he attributed to rainwater which resulted in runoff which led to excessive soil erosion. In a good year, he could harvest 2carts full of maize, an equivalent of 2000kg. This was despite using correct amounts of fertilizer as advised by the area’s agricultural extension officers.

“In 2015, when Total Land Care introduced the tree planting project, they distributed seedlings which I planted in my field. They also advised me to keep most of the trees that would sprout in the field- the number of trees did not matter as much as I could prune off the branches to prevent the trees from shading the crops from the sun. After about 3years, I noticed there was a change in my maize yield. The crops would look much healthier due to the manure decomposed from the leaves. I could now harvest enough food for my family, from 2carts full of maize to 6 or 7carts depending on rainfall pattern of that season. This is when I also decided to keep self-sown trees in my other portions of the field where I grow groundnuts, soybean and sweet potato, and I have realized increased yields for all the crops than ever before. The trees reduced the rate of soil erosion such that I am able to generate much income from the yield harvested than I used to.

Thokozani said that he has been observing the spacing of at least 5m from one tree to the other to allow for good crop growth. He has also ventured into the business of selling the trees as firewood and timber to his fellow villagers. Harvesting of the firewood is done during land preparation where the branches are pruned off and sold at K14000.00 per cart or K 100 per bundle of two tree branches. He has over 200 trees of different species that he manages on his farm.

“The challenge I used to face was theft of the trees. I used to guard the field at most times but the challenge was that I could not guard it all day every time. Therefore, with coordination with the Group Village Heads, a committee of Natural Resources was instituted to protect trees in my community. If you are caught cutting trees that do not belong to you, you are fined 2 chickens, an equivalent of K4000.00 per tree. Since this By-law was commissioned, there have been lesser cases of theft of trees in the community.” Narrated Thokozani.

“With the introduction of farmer radio-listening groups, we are able to follow what our fellow farmers are doing in Dowa as well as Lilongwe districts. I also belong to Mphandauyo listening club, which has also been featured on the radio programs twice since the project started.  This has given us an opportunity to develop a keen interest to share our experience as we know that we will be evaluated by our fellow farmers listening to the program. After each program, we have an opportunity to discuss the lessons learned and encourage each other to implement where we fall short. I am also glad that FRT provides an SMS feedback line (0995035111) and a toll-free line for the Mlimi Hotline- Call center (8111) that has allowed me to share my comments for every program aired. I am also glad that for the questions that have been posed, responses were provided in the next aired program.” Appreciated the farmer.

Thokozani further encouraged his fellow farmers in the country to start practicing FMNR in their fields. He said that it does not matter how long it takes for one to start appreciating the benefits. FMNR is not labor-intensive, there is no need to water it, you are only supposed to weed around and prune. He ended by emphasizing that once you start realizing the benefits of Farmer Managed-Natural Regeneration, you will not go back-you will become addicted.

Farm Radio Trust is a leading Organisation that exists to foster rural and agricultural development in Malawi through the use of radio and other information and communications technologies (ICTs).

Translate »
wpDiscuz
We do not share your personal details with anyone.